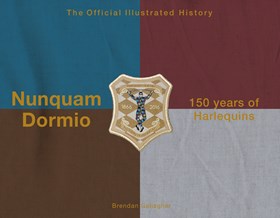 This lavish coffee-table book has been produced to mark the 150th anniversary of the founding of one of the world's most famous rugby clubs.

Written by former Daily Telegraph rugby writer, Brendan Gallagher, and put together by an award-winning editorial team, the illustrious history of Harlequins is brought to life through a wealth of newly discovered photographs from the club and RFU archives and historic, never seen before, memorabilia.

Books will then be dispatched in September 2016.